The young woman in the backseat of an Audi e-tron is struggling. Struggling with tiredness and with boredom. She is fidgeting with her hands and looking out of the window with lack of interest. While chewing on a dark-painted fingernail she sighs. Everything about her is asking: Are we there yet?

This is a scene from the trailer by holoride GmbH, a spin-off in which Audi Electronics Venture GmbH holds a minority interest. It mirrors a situation that a lot of parents are quite familiar with: While the driver enjoys the driving experience, everyone else perceives their travel time as time wasted. Sure, there are ways to kill time, but is time not way too precious for just being killed, really? Wouldn’t it be great if every single car ride became a unique experience for everyone in the car?

The young woman grabs the Virtual Reality headset lying next to her. She puts it on and all of a sudden finds herself in the middle of a fascinating game. Now it seems as if the Audi e-tron is no longer driving past the city’s grey building facades. Instead it is moving through a colorful fantasy world populated by blue and white little chickens, so it seems. As the car stops at a pedestrian crossing in the real world, the vehicle stops in the virtual reality as well and the little chickens can pass. With the controller in her right hand, the young woman can aim for the chickens and is rewarded with hit points.

The fusion of the vehicle data and the game content is perfect: With each bend along the way, with each acceleration of the car and each application of the brakes, the virtual reality experience is shaped. In a similar way, the young woman is flying through a prehistoric landscape on a dinosaur and navigating a spaceship through space later on in the trailer. 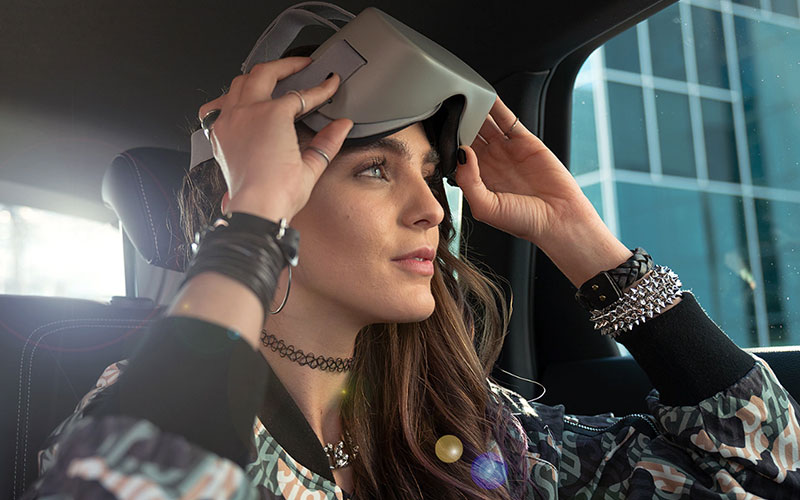 Audi brings stories to life in the car

“We took relevant data points like location, speed, steering, acceleration and braking – and matched these with artificial environments. By doing so, we not only created a perfectly motion-synchronized journey through virtual worlds, but something radically new that entertains backseat passengers in an unseen way,” says Nils Wollny, co-founder and CEO of holoride (as of February 1, 2019).

Even for a passenger who travels the same route everyday, the VR headset will provide a new experience every time. The little chickens at the pedestrian crossing might not be there anymore the next day because the car ride in the real world will also be different. This way a whole new media format emerges: elastic content.